Lily is a beautiful rescue cat that was brought to me for animal Reiki sessions when she was about 2 years old. She was having trouble adapting to her new home and would hide under furniture for hours at a time when people were home, and then terrorize the house when they were gone. She hissed incessantly at strangers and other animals and disliked the grandchildren. Her new owners loved her and wanted to provide a safe, loving home for her, but were at their wit's end. Lily was just not able to incorporate herself into their lives and they knew they needed help.

They brought Lily in for her first Reiki session and after hearing the symptoms and about Lily's background we decided on 2 main objectives for the sessions:

1. To relieve the stress and anxiety that Lily has been feeling since moving to her new home. Many of her actions were a result of emotional issues she was feeling at the abrupt death of her previous owner and transfer to a new home environment that included far more people and activity than her previous residence.

2. To increase the bond between Lily and her new owners and ease her transition into their lives. A loving bond was really important to her new owners as they wanted her to be a much-adored part of their family but were afraid to establish rules and set boundaries because of her emotional state.

We worked through 3 sessions together. The first session was simple and consisted of pure love and universal energy for healing. We just wanted her to know she was loved and to feel at peace in her new home. The second session revolved around the bond with her new owners, transmitting their love and happiness to have her as part of their family, as well as their need to have her follow certain family rules. In this session, we also learned of Lily's need to have a private space of her own to retreat to if she feels overwhelmed or anxious. Her owners put this information to good use and created a beautiful, quiet space for her in the corner study with a curtain, comfy bed, and pillow. Lily started to use this space instead of hiding under furniture and would come out on her own accord when she was refreshed and ready to interact again.

The last session revolved around Lily's interaction with the grandchildren and other friends invited into the home. We created a process for introducing Lily to members of her 'extended family' and eased her sense of anxiety related to the rambunctiousness of small children. Now she happily greets visitors and patiently lets the children pet her and then returns to her private space as needed. All of these sessions were accomplished by transmitting the healing energy of Reiki and being open to any messages sent back in return by Lily.

I am happy to update that Lily is now a much happier, relaxed member of her new family. Her owners report that she now comes up to them frequently throughout the day to greet them and love on them :) She no longer hides or hisses incessantly at strangers, and she even follows the grandchildren out into the patio to watch them play! 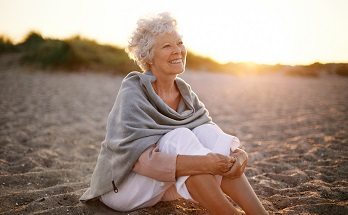 Jackie had been suffering with lower back pain for years and her doctor just attributed it to arthritis and had her on pain medication and anti-inflamatory drugs. Jackie wanted more than anything to stop the daily medications and have pain free adventures with her grandchildren. Jackie lives in Florida so during our first phone consultation we spoke about her uncertainty regarding energy healing. She was a teacher and then principal during her career and her more traditional belief system made it hard for her to believe in the healing power of Reiki - especially distance Reiki like I was proposing.

I was able to explain the process in more detail and she agreed to one session. She told me later it was more out of desperation than anything else! :) Either way, we scheduled our first session and in that hour I saw that she was holding on to a lot of emotional pain in her second chakra that was directly transmitting into lower back pain. I offered the healing and her body gladly accepted it everywhere except for in the space around her lower back. After the session, I mentioned this to her and she immediately teared up. She wasn’t able to talk further on the matter but I think she did start to understand during that first session that the emotional pain she was holding was manifesting itself as physical pain.

It was two weeks later when Jackie called me back and was ready to schedule a second session. She relayed to me that in the weeks since her session she had been busy processing memories and events from her young adult life and that even though her back pain was still present, overall she felt better - lighter - than she had in a long time and wanted to explore this path further.

We had a total of 8 sessions over the next 4 months and Jackie was free of her chronic pain and off her medications by the last session. She said this process also led her to naturally want to change some aspects of her diet and she began to see a naturopath to create a customized wellness plan. I am happy to report that Jackie is now happier and healthier than she has ever been and spending hours of time chasing her grandchildren around the beach! She is a regular client of mine and I “see” her once a month for her wellness check-ins.